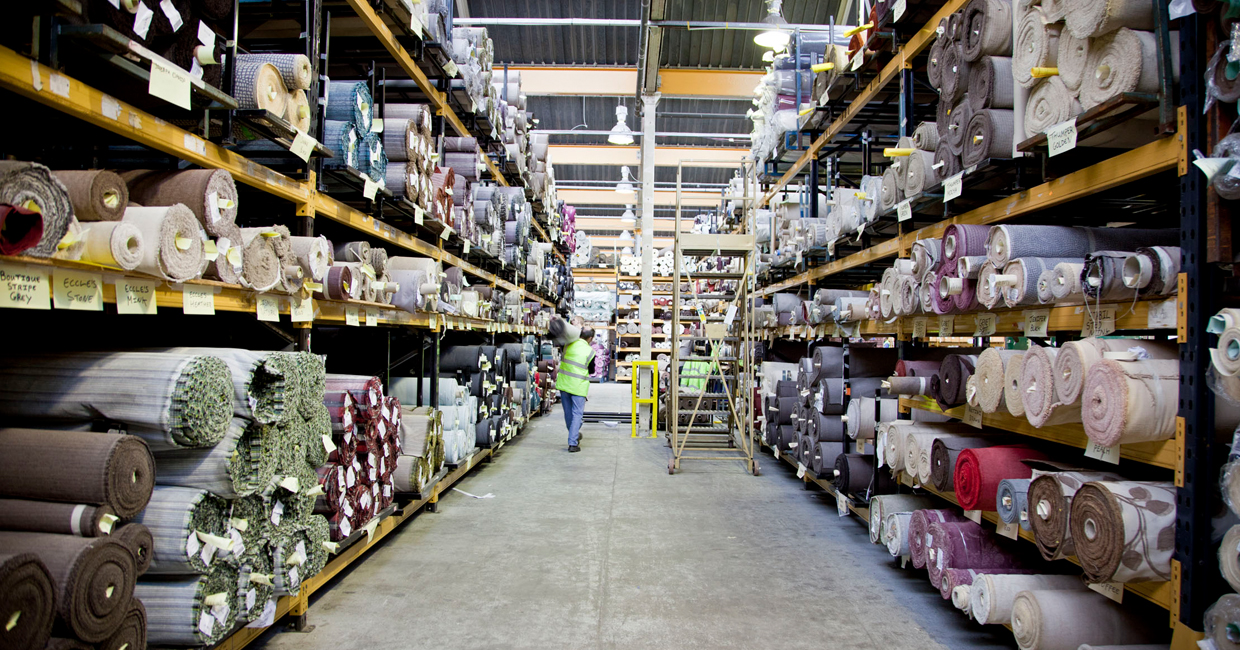 Recruitment is a familiar challenge for manufacturers. Factory work simply doesn’t offer the rewards and excitement school-leavers expect, and new immigration laws only threaten to exacerbate the industry’s staffing woes. For Westbridge, which employs around 1100 staff in North Wales, the pressure is particularly acute – but the sofamaker refuses to become a victim of its own success, writes Paul Farley …

Last year, the ONS estimated that UK manufacturing jobs had fallen by -17% since 2006, and with Brexit promising a dramatic reduction in immigration, the sector faces an unprecedented skills crisis.

While more immediate challenges have made it easy to overlook the widening skills gap, there are businesses taking the long view and building skilled workforces that are fit for the future.

Westbridge’s turnover jumped from £50m-100m from 2014-17 alone, while unemployment in Deeside – which also boasts big manufacturers such as Airbus, Toyota and Iceland – currently stands at just 0.7%.

“With an output of more than 10,000 units a week, I believe we’re the biggest upholstery producer in the UK,” says Nigel. “And we’re diverse – we offer more than 150,000 SKUs, right through the price-point spectrum, on relatively short lead times. But while we have a very well-trained workforce, maintaining it requires continual investment.”

Spanning around 380,000 sqft, Westbridge’s sprawling Deeside and Holywell sites employ around 1100 (many others work remotely, in the company’s Romanian cut-and-sew operation).

“We used to be able to rely on EU labour,” explains operations director Paul Myerscough, “which was fine when we majored on the volume production of certain models. But as our customer balance changed towards MTO [made-to-order] for a wider client base (both nationals and independents), we’ve struggled to make up for employee attrition – and the new points-based immigration system will only make things harder.”

To complement its local recruitment programme, Westbridge partnered with Coleg Cambria to launch a formal apprenticeship scheme in March 2018. Overseen by academy & technical manager Leigh Ollosson, the scheme sees each intake of 16-18 year olds taught about every area of sofamaking, from cutting and sewing to framebuilding and upholstering.

“We want them to get a taste of everything,” Leigh explains. “I want these lads to learn everything I know, and instil in them a sense of quality control – they need to take ownership of what they make. The consumer demands quality, and I’ve always made furniture like it’s going to be a piece of my own – nothing slapdash!”

After 18 months, the apprentices are introduced to work in the factory. “Going straight into a line environment from outside can be very daunting,” says Paul.

But for a manufacturer of Westbridge’s size, the apprenticeship pipeline is too narrow and prescriptive to satisfy demand. For example, of the 20 applicants that joined in 2018, only four completed the course.

“It was clear early on it wasn’t going to be scalable,” says Paul. Some suggest that automation and AI could remedy the growing skills gap, but Paul argues that machines are only really effective when they’re executing the same operations day in, day out. “We can have days here when no two models made are the same,” he states. “We need manpower.”

Consequently, Paul helped develop a training programme to be executed in tandem with the apprenticeships – but at a much faster rate, and with more focused course content. He calls it the ‘Green Labour’ scheme – a hybrid of target-based, on-the-line training and class-based skills development, principally targeting 18-35 year-olds.

“We need them to be line-ready fast,” says Paul. “Rather than teaching them all the aspects of upholstery, like we do in the apprenticeships, we focus on certain operations.”

Wednesday 4th March saw the official launch of a new training academy at Westbridge’s Unit 3. Combining the growing number of apprentices and the new Green Labour recruits, the academy is part production line, part classroom, and offers trainees a managed and enclosed environment from which to enter the wider workforce.

“A proportion of people in our catchment area leave school without any qualifications and want to go into industry,” adds Nigel Hollifield, “yet labour still isn’t readily available. I think the training academy will maximise our chances of attracting the best people, and ensure we have the capacity to keep growing.”

Yet recruitment is just one side of the coin – after all, what’s the use of training skilled workers if you can’t retain them? Luckily, Westbridge is no slouch in this area, either, and the day the academy went live, Westbridge gathered the longest-serving members of its workforce to pay tribute to their long service.

Back in 2004, Westbridge (then Deeside Furniture) was founded when several employees left the Christie Tyler Group to create a new manufacturing operation. As luck would have it, the group’s subsequent dissolution (and the support of several key retailers) provided opportunities to take Deeside to the next level, and a good number of skilled workers (and business assets) relocated from south to north Wales.

Nigel is just one of 34 members of Westbridge’s team who can boast over 30 years of industry service (an astonishing 42 years in his case). “And a good deal more have done 15-25 years,” he says. “We’re going to be dishing out a lot of watches and certificates at this rate!”

Westbridge’s commercial MD Paul Islip (who was also there from the beginning), addressed the assembled veterans over lunch, saying: “There’s over 1000 years of furniture manufacturing experience here today – I think it’s a unique occasion for the furniture industry. From our foundations in the 80s, it’s your knowledge and experience that’s been the backbone of this business. And with the opening of our new academy, we’re making sure we’re training people to take care of business for the next 30 years.”

Speaking to a handful of the 34-over-30 staffers present, it’s easy to see how Westbridge is bucking the trend of today’s flighty employment market and proving that there really is such a thing as a job for life. Aside from security, approachable managers and the convenience of locality, for most the appeal is a Westbridge’s flexibility – whether that’s giving employees freedom to deal with parenthood, caring, illness or bereavement – plus, crucially, the very real prospect of progression.

For example, the factory manager at Westbridge’s main site started out as a sewing machinist in 1987. Senior quality and technical manager Anthony Pydiah (32 years) joined as a graduate trainee, before meeting his future wife Lynn (30 years), who pioneered the use of CAD in the business. Meanwhile, group leader Sally Lee (32 years) joined as a product checker, while the aformentioned Leigh Ollosson came on board at the tender age of 16.

It’s a timely reminder for anyone entering the business that there are so many places to go within it. “There’s definitely a poor perception of industry labour in general,” says Paul Myerscough. “People don’t really want their kids going into upholstery, or joining a production line – but if they knew more about the scope of this business, they might change their minds.”

Naturally, every one of the 34-over-30 were there 16 years ago when Westbridge was Deeside Furniture, making furniture for M&S – a partnership which helped lay the foundations of a successful business.

When M&S formulated its Plan A project towards sustainable production in 2007, Westbridge was the first factory in the world (alongside a Sri Lankan lingerie producer) to become compliant, under Anthony Pydiah’s guidance. The sofamaker went on to devote a huge proportion of its production capacity to IKEA, but also pioneered MTO mass production – M&S was the first major retailer to introduce an ‘any fabric, any shape’ proposition.

Both developments would strengthen Westbridge’s hand immeasurably. When production started to move away from Britain in the 90s, it became clear to Nigel Hollifield that domestic manufacturers would no longer be able to compete on labour costs – but that they could deliver USPs that the Chinese could not, such as great service, quality, and speed of delivery. And with a growing number of people choosing to specify their own models from a broad range of options (à la M&S), local manufacture was the only model which could effectively fulfil demand.

From an auditing POV, working to such exacting standards from the outset (“at a certain point, jumping through hoops becomes the norm”, jokes Paul Islip), Westbridge went on to become the natural choice for blue-chip nationals including Next, Sofology and John Lewis, plus a growing number of independent retailers.

“Today, people want furniture quicker, and expect better prices and quality,” says Nigel. “And, returning to my original point, to achieve this, the standards our workers must reach are exacting. We have to look at where we’ve come from and where we’re going, and make sure every member of our team has the knowledge and confidence to deliver what our customers have come to expect.”

Success requires investment – in plant and machinery, materials, strategy, and more. But, with a skills shortage looming ever larger, Westbridge has acknowledged that holding onto its market-leading position truly requires investment in people. Why not join that family?

This article featured in the April 2020 issue of Furniture News.